Why isn't CBS covering what the Israel Lobby did to Chas Freeman? 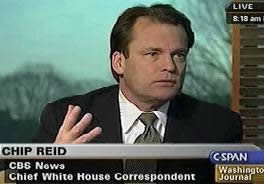 “The libels on me and their easily traceable email trails show conclusively that there is a powerful lobby determined to prevent any view other than its own from being aired, still less to factor in American understanding of trends and events in the Middle East. The tactics of the Israel Lobby plumb the depths of dishonor and indecency and include character assassination, selective misquotation, the willful distortion of the record, the fabrication of falsehoods, and an utter disregard for the truth. The aim of this Lobby is control of the policy process through the exercise of a veto over the appointment of people who dispute the wisdom of its views, the substitution of political correctness for analysis, and the exclusion of any and all options for decision by Americans and our government other than those that it favors.” - Ambassador Chas Freeman

"The withdrawal of Chas Freeman as chairman of the National Intelligence Council, following two weeks of vituperative attacks on him by the amen chorus of the U.S. Zionist lobby is a black mark on the Obama administration." - Israel Lobby Defeats Freeman Appointment, Robert Dreyfuss

Posted by NeoConZionistThreat at 2:08 AM Links to this post

See video:
Unfair Policy Creates Anger at the US

http://tinyurl.com/d7l439
Posted by NeoConZionistThreat at 6:00 AM Links to this post

Posted by NeoConZionistThreat at 11:00 AM Links to this post

http://tinyurl.com/cmmw4l
Posted by NeoConZionistThreat at 8:20 PM Links to this post

Why isn't the media talking about Charles Freeman? 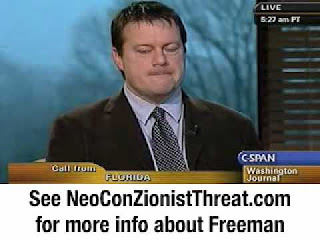 SEE VIDEO: Why isn't the media talking about Charles Freeman? Tinyurl.com/dmc2xg
Posted by NeoConZionistThreat at 7:52 PM Links to this post