"Fred Hiatt, over at the Washington Post, makes much of the phrase found in many of the conclusions of the report, “were generally substantiated by intelligence community estimates.” What he doesn’t tell you is that the committee only examined five of George Bush’s speeches, not the totality of the administration’s statements" - Bush Lied, and Fred Hiatt Lied Too

"Someone should tell Fred Hiatt that supporting your position by omitting crucial parts that undercut your point is lying. That’s what Hiatt did in this editorial defending the integrity of the Bush administration’s use of prewar intelligence to justify the invasion of Iraq." - Not Only Did Bush Lie, But Fred Hiatt Lied, Too

Neocons Pushed Us into War with Iraq and Now with Iran!
See Video:

http://tinyurl.com/5johhg
The "JINSA crowd" is control of the Pentagon. The Jewish Institute for National Security Affairs, it pushed us into Iraq and it's doing the same to get us to attack Iran.
See link

The Transparent Cabal
Why would top neocons deceive us into a war with Iraq? You can read about "A Clean Break: A New Strategy for Securing the Realm" which reveals that attacking Iraq was an agenda long before the 9/11 attacks which they dishonestly used as an excuse for the Iraq war.
See Video:
Scott McClellan Questioned about Neocon Push for Iraq War

If you look at what Colin Powell said in Washington Post editor Karen DeYoung's biographical book about him. She had said that Colin Powell had conveyed to her that the "JINSA crowd," the Jewish Institute for National Security Affairs, which Dick Cheney is associated with, is in control of the Pentagon and pushed us into Iraq and now is doing similar to get us to attack Iran.

They Knew They Were Right: The Rise of the Neocons
by Jacob Heilbrunn

The Neoconservative Revolution: Jewish Intellectuals and the Shaping of Public Policy by Murray Friedman

SONALI KOLHATKAR: Well, certainly, what Afghanistan gives to the United States, particularly under the Bush administration, which has not been as interested in oil pipeline routes as it has been in military bases, it gives, of course, as you said, a launching pad, and it enables the United States to encircle Iran.

When I was in Afghanistan a few years ago, we drove past a military base that used to be just a local airport near the border with Iran, and our driver told us, “Oh, yes. Last month, US troops came and took over the space. And if they attack Iran, everyone knows that they’re going to probably do it from here, as one of the places.”

McCain has said that he would like to see the military bases in Afghanistan become permanent. And this is very important, because geopolitically Afghanistan is crucial to the United States. Never before, since—until 2001, has the United States had military bases in the heart of Central Asia, in Russia’s backyard, in China’s backyard, and certainly, of course, in Iran’s backyard. This is going to be something that the US will make use of in the future, unless, of course, the American people stand up and say, “Get out of Afghanistan,” which is what I think we should do.

AMY GOODMAN: Sonali Kolhatkar, thank you very much for joining us, host of Pacific radio KPFK’s morning show called Uprising. She is co-author of Bleeding Afghanistan: Washington, Warlords, and the Propaganda of Silence.

Neocons put US at Risk of Nuclear War with Russia

Neocons put US at Risk of Nuclear War with Russia

see video
McCain's senior foreign policy aide was a director of the Project for the New American Century. Neoconservative Randy Scheunemann pushed for the illegal Iraq War and was a paid lobbyist for the foreign country GEORGIA. As Scheunemann advised McCain, McCain called Georgia's President Saakashvili on the same day Scheunemann profited from a $200,000 lobbying contract with Georgia.

"The day of the call, a lobbying firm partly owned by the adviser, Randy Scheunemann, signed a $200,000 contract to continue providing strategic advice to the Georgian government in Washington." - While Aide Advised McCain, His Firm Lobbied for Georgia

"The neoconned Bush Regime and the Israeli-occupied American media are heading the innocent world toward nuclear war." - Paul Craig Roberts, Two Morons: Bush and Saakashvili "President Bush, Will You Please Shut Up?"

Did McCain's foreign-policy advisor profit from the Iraq war?

"It is obvious that American foreign policy, with is goal of ringing
Russia with US military bases, is leading directly to nuclear war.
Every American needs to realize this fact. "- Are You Ready For Nuclear War?

"It was obvious to anyone with any sense—, which excludes the entire Bush Regime and almost all of the "foreign policy community"—that the illegal and gratuitous US invasions of Afghanistan and Iraq, and Israel's 2006 bombing of Lebanon civilians with US blessing, would result in the overthrow of America's Pakistani puppet." - Paul Craig Roberts

McCain PNAC Neocon adviser got money from Georgia
Posted by Tom at 3:20 AM Links to this post

NeoCon Zionist Threat, We Are Still at Risk of Another War

NeoCon Zionist Threat, We Are Still at Risk of Another War 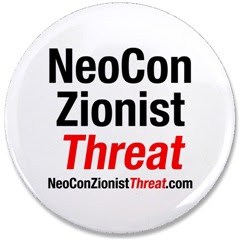