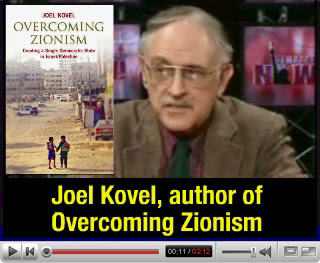 Joel Kovel, author of Overcoming Zionism, talks with Amy Goodman about Zionist pressure which caused University of Michigan Press to drop his book from distribution. Only after fellow academics and civil libertarians led a campaign to get the book published did University of Michigan Press overturn their decision and agree to continue the distribution of Kovel's book.
Posted by Tom at 7:07 PM Links to this post

A citizen asks Rep. Jane Harman if she will address the Mearsheimer and Walt book: The Israel Lobby. Problem is, Harman follows AIPAC which is pushing for an attack on Iran. Both parties are owned by the AIPAC Lobby, the Israel Lobby 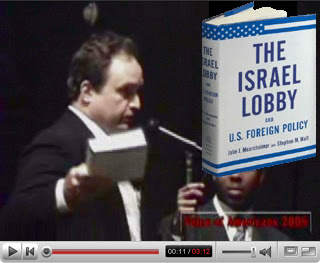 Both parties are owned by the AIPAC Lobby, the Israel Lobby

When questioned, Harman claims she is against the Bush policy YET she voted for H.R. 1400, saying, "Our fight, and we must continue it, is against the threats and the actions of the extreme regime in Iran who threaten our Democratic ally Israel and who threaten the entire world with the prospect of a nuclear bomb."

Don't Let Them Trick Us Into Another War

Don't Let Them Trick Us 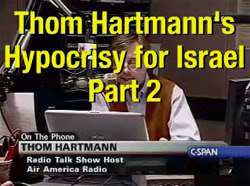 Re: AIPAC is pushing us to war with Iran for Israel

Re: AIPAC is pushing us to war with Iran for Israel
See Video:

"There are pro-Israel groups, not just Jewish - many of them are Christian fundamentalists, that believe in supporting the Israeli government no matter what it does and no matter what it wants. These people are all upset and excited about Iran and are pushing hard for a confrontational stance." - Barbara Slavin

Barbara Slavin discusses her book, "Bitter Friends, Bosom Enemies: Iran, the U.S. & the Twisted Path to Confrontation," as well as the current U.S. stance toward Iran and her thoughts on how to deal with the country and its president.

The fact is, Israel attacked the USS Liberty. "It's time for the truth to come out," declared Boston, who is now 84. "There have been so many cover-ups." - New revelations in attack on American spy ship Veterans, documents suggest U.S., Israel didn't tell full story of deadly '67 incident By John Crewdson Tribune senior correspondent

Also see: AIPAC is pushing us to war with Iran for Israel

Kathleen and Bill Christison on the phone

"Just a few days after the Wilkerson story came out and also only days after release of the Mearsheimer-Walt book, a caller to the Thom Hartmann radio program commended the book, urged Hartmann and his guest at the time, Senator Bernie Sanders, to read it, and asked Sanders to address the issue of Israel's and the lobby's support for the Iraq war. Hartmann shut the caller off with a comment that "we don't hype books on this program" (after having just allowed another caller to hype another book). Sanders then proceeded to denounce "conspiracy theories" such as the notion that Israel had anything to do with the war, and Hartmann finished off with a remark that, "besides," a report just came out --obviously meaning the Wilkerson story -- that demonstrates there was no Israeli link to the war.

In fact, the Wilkerson report does not refute the notion of an Israeli link; he addresses only Israeli-U.S. contacts in early 2002, whereas by later in 2002 and 2003 the evidence is overwhelming that Israel and particularly the Israel lobby were pushing hard for the war."
See: Thom Hartmann cut off a caller talking about Israel Lobby book
Audio clip from http://www.kpfk.org/
Posted by Tom at 11:30 PM Links to this post